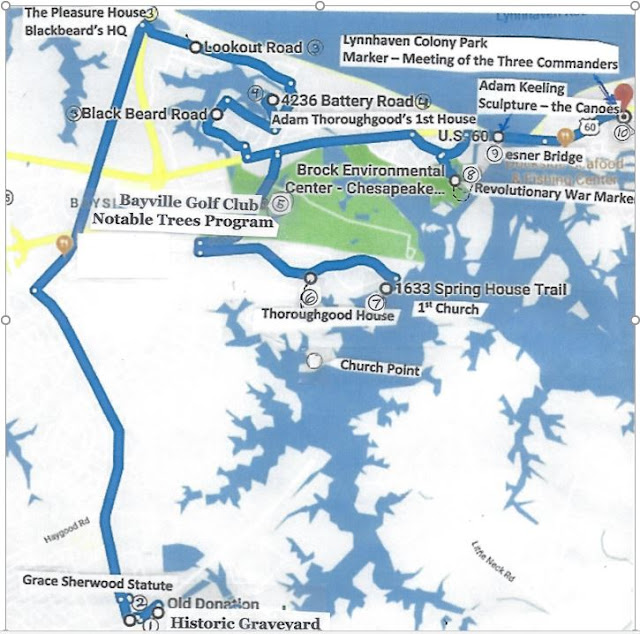 1st Stop, Old Donation Historic Graveyard
Our graveyard is full of veterans, some unmarked and unknown when graves prior to the eighteenth century were marked with a wooden cross and are long since gone.
On May 17th, 2014 a wreath-laying ceremony was held to mark a new gravestone for Revolutionary War Patriot Col Edward Hack Moseley Jr (1743 – 1814) and a plaque listing 13 founders and patriots, six buried in our cemetery. In recent times there were at least 45 veterans buried in one of five different grave areas.
The most famous Walke grave stone is that of Rev. Anthony Walke (1755-1814). In June 1788 young Walke was one of the representatives from Lynnhaven Parish that approved the Constitution. After being ordained a priest Rev. Walke presided as rector over Lynnhaven Parish Church at a critical time after losing support from England. He not only delivered sermons with a captivating mild-mannered voice, but when he heard those hunting horns, he would immediately stop preaching and hurry off on his horse Silverheels to join the hunt.  He lived in the Walke Manor house, today’s Ferry Farm Plantation.
After Rev. Walke died, his son David Meade Walke (1800 – 1854), used the Walke Manor House for gambling parties. At one of them, in 1828, a drunken guest tipped over an oil lamp and burned the plantation to the ground.
﻿
﻿

Grace did not behave as women of that period did, creating talk from neighbors, and her use of herbs was thought to be the way of witches.          A Girl Scout Troup called “Gracey’s Girls” polishes the marker each year.
A 1942 roadside marker had an  account of Grace Sherwood’s punishment for being a witch. “She was put in water (the Lynnhaven River), ‘above man’s depth,’ to ‘try her how she swims therein.’” 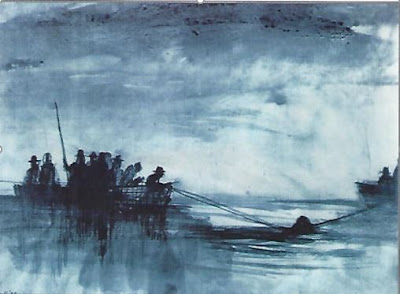 In 2002 a truck hit the marker. It was replaced with new wording adding hand and foot bindings: “Sherwood's accusers on 10 July 1706 tied her hands to her feet and dropped her into the Western Branch of the Lynnhaven River.” This wording has become the tale of her fate. Some stories even embellished the ducking by saying a 13-pound Bible was placed around her neck.  If accurate she could not have survived, but she did survive the ducking and was placed in the jail where our current church stands. 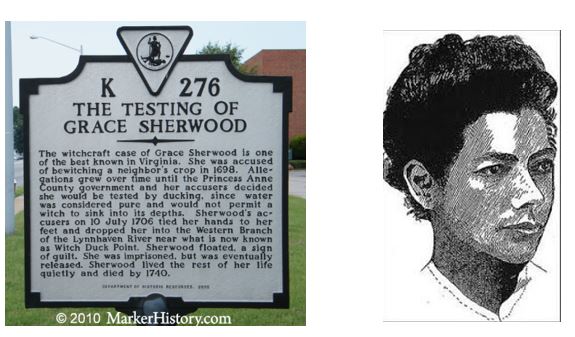 
There are a number of stories and legends about Blackbeard. Here is one that could be either true or just another legend. One day while Blackbeard and his men were pirating a ship loaded with boxes of treasure, a Navy’s ship came into sight. Without much time, Blackbeard escaped by setting sail through a narrow inland waterway, the Lynnhaven River. To lighten his ship his men buried the heavy boxes of treasure in a churchyard cemetery as Blackbeard knew no one would look there. The pirates then made haste out of the Lynnhaven River and on down to his North Carolina hideout. He intending to return to reclaim his treasure later, but that was never to be as the Navy ship caught up with Blackbeard on North Carolina’s Outer Banks. A bloody battle ensued and ended when Blackbeard was beheaded at the hands of Lt. Robert Maynard on November 22, 1718. His head was hung from a pole at the mouth of the Hampton River as a warning to others who might be tempted by piracy. There the head remained for many years and became known to this day as Blackbeard’s Point, a place that can be viewed from a Hampton University lawn just off Franklin Blvd & Averill Ave. 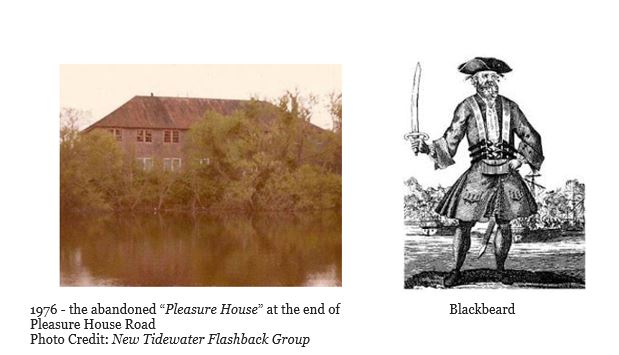 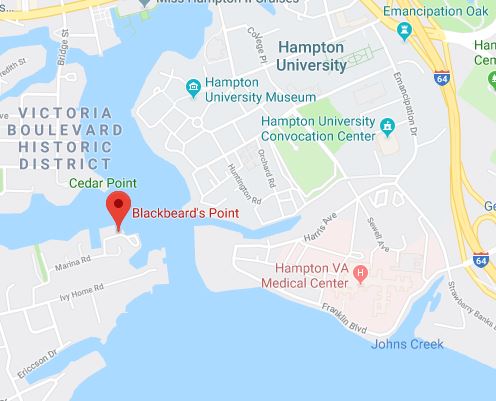 4th Stop – (5 miles). We drive down Lookout Road past a plaque that reads “Chesapeake Beach founded 1919.” People instead have come to call it Chic’s Beach. Chic's was a place where you could pick up limeade and an ice cream.  At Indian Hill Road we turn right and drive over the old path of the Lynnhaven River. Notice that the road goes slightly uphill to a formation called Indian Hill. We turn right on Bayville Road to left to 4236 Battery Road in Baylake Pines, the home of Susan Boland, whose house is on Indian Hill. Susan who continues to find pieces of Indian and colonial artifacts. Hopefully she will be around to show us her collection. In 1635 Adam Thoroughgood sent his indentured servants to build his first wood house on his newly acquired 5,350 acres Grand Patent. Later in the 1650’s his son Adam II built a house in the vicinity, both most likely on top of Indian Hill, an excellent location in this flood plain and near the Lynnhaven River which had not yet punched through a one-mile sand bar at the Lesner Bridge location until 1667.In April 1955, while searching for Indian sites, Archeologist Floyd Painter found remains of an Indian village plus remains of English dwellings, possibly Adam Thoroughgood’s first house built in 1634 and possibly his son’s first house built in the 1650’s over his father’s first house that burned down in about 1650. Painter searched here because Indian Hill was an ideal location for building an Indian fort and later English homes.

5th Stop  - (7 miles) At the entrance to Bayville Golf Club, a 220 year old Eastern Red Cedar, one of 95 tress in the Lynnhaven River Now, Notable Tree Program. With the growth of colonization into the 18th century, prime timber became one of the largest exports from Virginia. By the mid-20th century, in excess of 95% of the Old Growth Forests in Virginia Beach were gone, trees between 150-500 years old. Ninety-five are left widely scattered and have been catalogued in the Lynnhaven River Now Notable Tree Program, the oldest living things in Virginia Beach. 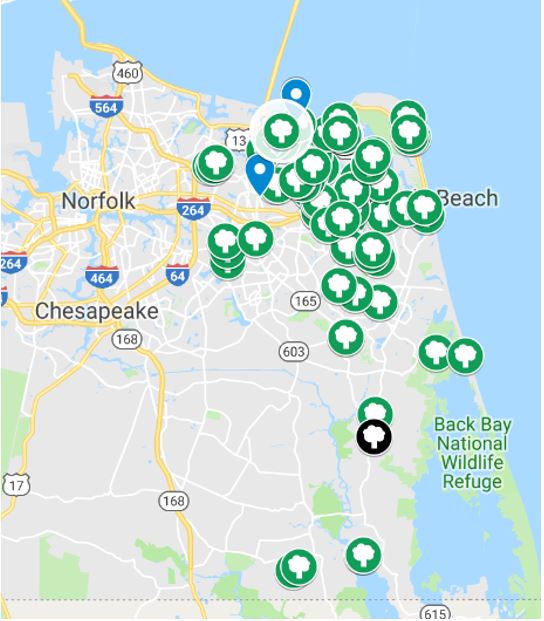 6th Stop  - (8 miles) The Thoroughgood House. On the way looking to the right is a brick serpentine wall made famous by Thomas Jefferson (1743–1826) who incorporated them into the architecture of the University of Virginia. We then stop at 4025 Church Point Road where a short path leads to the Thoroughgood House at 1636 Parish Road. 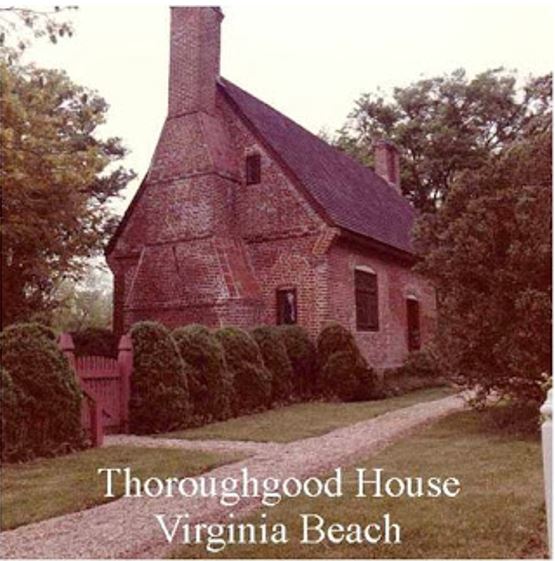 The Thoroughgood House now standing has three walls built using an English bond pattern. The last wall was completed using the Flemish bond pattern. This style was not popular until the 18th century, the date the city now claims that it was built. If so, why wasn’t Flemish bond used through-out? This is only one of the many arguments about its construction date – 1640, 1680 or 1719.

Just after this stop we drive past the Church Point Manor House which was recently sold (asking price $2.5 million) and is now a private residence. The house was originally built in the 1860’s as a farmhouse on Adam Thoroughgood’s 5,350-acre Grand Patent. It is one of the rare surviving 19th century farmhouses in the area. In 1993 the house was made into a bed & breakfast and neighborhood pub, the Cellars. 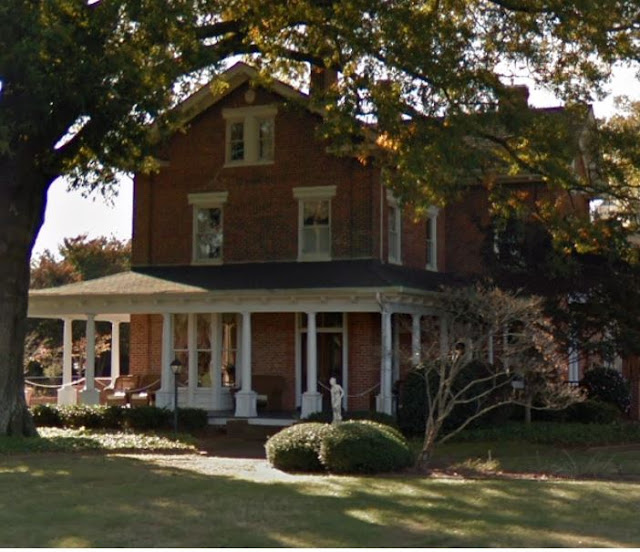 Another rare surviving 19th century farmhouse of the 19th century is the Wells Planation House built in 1811 on Lake Taylor. The first owners were married by Rev. Anthony Walke (1755 - 1814). Today it also is a private residence.
7th Stop - Church Point Monument, Spring House Trail (10 miles) The monument here (half a mile down-river from Church Point) reads, “Church Point – 1639. Near this site Lynnhaven Parish was built in 1639. The church and its graveyard were the victims of erosion by the waters of the Lynnhaven River. Among gravestones found were those of Adam Thoroughgood and his wife Sarah, and her last two husbands, John Gookin and Francis Yardley. Presented by Suffolk Chapter Virginia Society, National Society Colonial Dames XVII Century 1995.”
In 1653 Sarah Thoroughgood-Gookin-Yeardley’s third husband and Sarah sponsored a boat expedition into the unsettled Currituck and Albemarle sounds of North Carolina sending their eighteen-year-old son Adam Thoroughgood II to lead the expedition. They met with friendly Indians who accompanied them back to the Thoroughgood plantation. They were amazed to see children writing on tablets. A few months later one of the chiefs returned with his tribe. Even though the little congregation was terrified of the Indians, Sarah welcomed them into the tiny church and escorted the chief’s little son down the aisle to be baptized. He was left behind by the chief to be brought up learning to read and write.  Francis died a year later, followed in two years by Sarah without word of the little Indian boy’s fate.  Twenty-six years later Grace Sherwood was married in the same little church. With the opening of the Lynnhaven Inlet in 1677, by 1690 the river was swamping the church. A new church was built further up the Lynnhaven River at today’s site, our second church. We are now in our third church opened in 1736.

8th Stop (12 miles) The Pleasure House Point Natural Area trail behind the Brock Environmental Center.  Here on the trail is an interpretive sign, the Battle of the Capes Sep 5, 1781. During the close of the Revolutionary War Admiral deGrasse, commander of the French fleet, engaged the English fleet at the mouth of the Chesapeake Bay, and by holding it from reaching Lord Cornwallis at Yorktown with vital supplies, General Washington was assured of victory. This epic sea battle became critical in securing America's independence from England.
Opening on January 5, 2015 the Brock Environmental Center is named in honor of Joan and Macon Brock of Virginia Beach, who generously donated $3.6 million toward the $21 million project. The 10,000-square foot building was the first Leadership in Energy and Environmental Design (LEED) Platinum certified building in Virginia, a green building rating system. Its natural brown wood siding sitting on pylons allows natural sand to flow under it to blend with the natural surroundings. On May 13, 2016, the center was honored for becoming one of the first 11 projects to meet all of the criteria required under the “Living Building Challenge” by the International Living Future Institute, considered by many to be the highest honor in the world for green building projects. The Brock Center is the first building in the South to earn it. Among the center’s distinctions is the first-ever system in a U.S. commercial building for making all drinking water from rainwater. It generates all of its own electricity from solar panels and two wind turbines.

9th Stop - Lesner Bridge, west side at Ocean Park  (12 miles) In Oct 2018, a new aluminum sculpture created by Donald Lipski was installed. Lipski’s idea for the canoes came from Adam Keeling, the son of Thomas Keeling who was one of the first of 105 indentured servants that Adam Thoroughgood persuaded to come from England. In 1667 Adam organized a group of people to dig a small pilot channel from the Lynnhaven River through a huge sandbar about a half-mile long to the Chesapeake Bay so small boats would not have to make the long journey west to the mouth of the river which at that time was at Little Creek. A month later on September 6, 1667, the dreadful hurricane of 1667 struck and forever widened the little pilot channel to the Chesapeake. 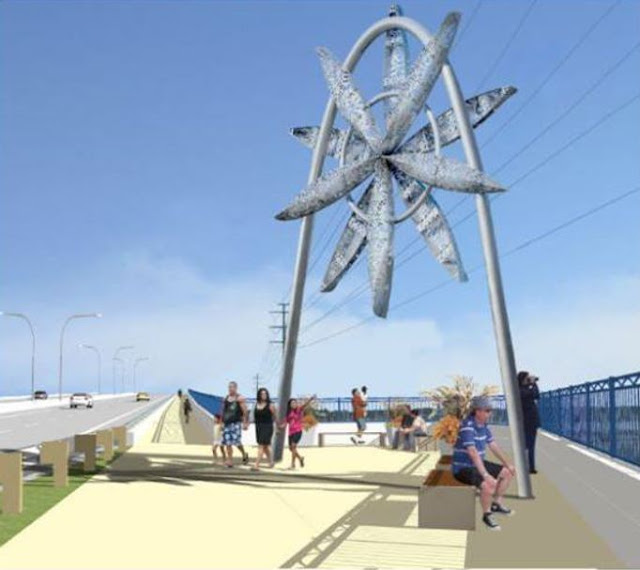 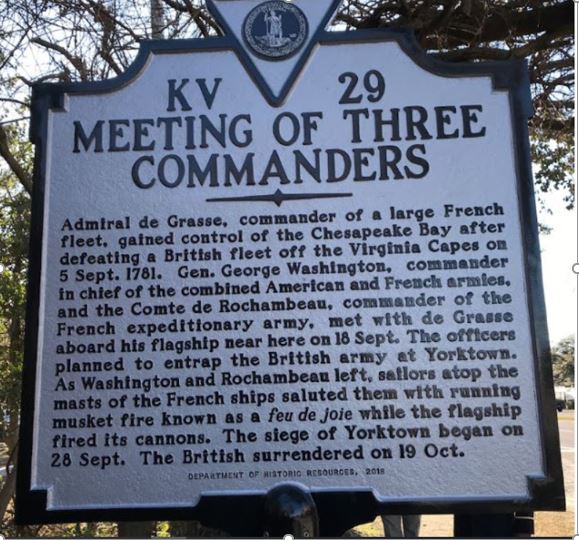