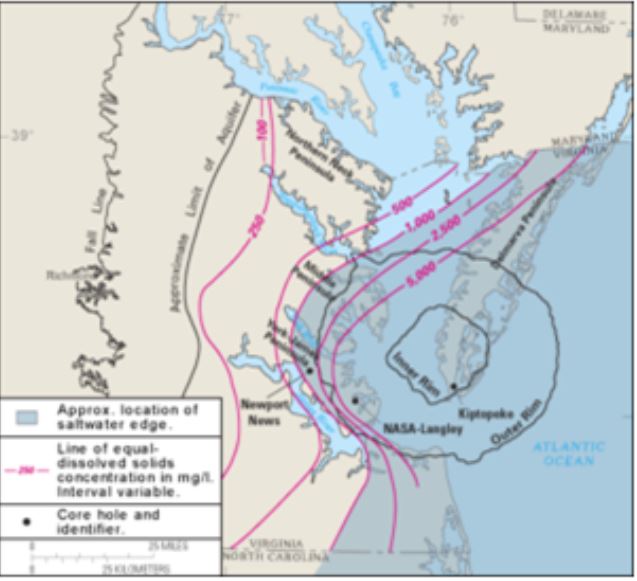 35 Million Years Ago the Chesapeake Bay Impact Crater (discovered in 1983), hit in the vicinity of Cape Charles, punching a deep crater in the ocean floor with its outer rim along today’s present Cape Henry Beach shoreline. At that time the ocean shoreline extended to Richmond. Millions of tons of water, sediment, and shattered rock were cast high into the atmosphere for hundreds of miles along the East Coast. An enormous seismic tsunami engulfed the land and overtopped the Blue Ridge Mountains, providing the reason sea shells can be found high atop the Blue Ridge. 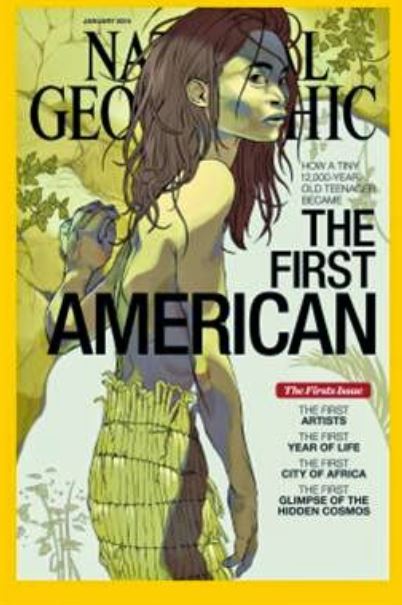 18,000-year-old remains of the first Americans were found at the Cactus Hill Archaeological Site located 60 miles west of Richmond on the Nottoway River in Sussex County. These Asians came across the Bering Straits, a further migration into the Americas that resumed 20,000 years ago after the Wisconsin Glaciation waned. They settled along the Susquehanna River (today’s Chesapeake Bay) as the Atlantic Ocean was 130 feet lower and 50 miles east of the present Virginia shoreline. The Chesapeake Indians led a peaceful life in a land abounding with huge trees, bountiful game, and a mild climate. In 1606 thing changed. Chief Powhatan learned from Algonquin priests that a great danger would arise from the mouth of the Chesapeake Bay at today’s Cape Henry. Since this was where the Chesapeake tribe lived, Powhatan’s warriors murdered every man, woman and child. He apparently slaughtered the wrong group of people. 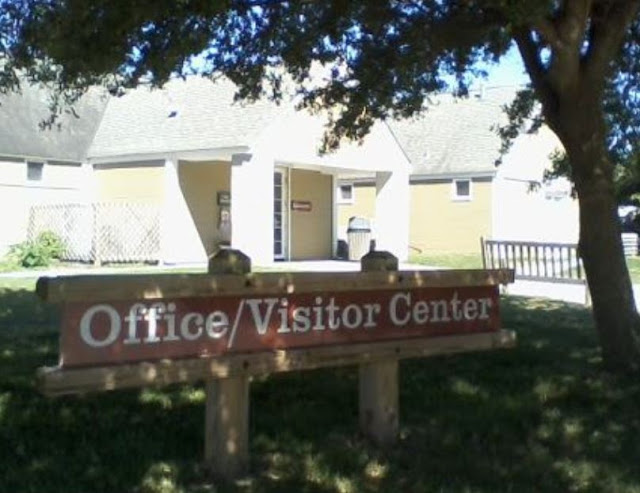 Who has visited a Virginia Beach site that is one of two sites relating to the Jamestown settlers?  The National Park Service’s Jamestown Colonial National Historical Park at Cape Henry is on the grounds of the Joint Expeditionary Base-Fort Story, the spot where the Jamestown Settlers stopped for four days before sailing on to Jamestown Island.
This story is told at the First Landing Beach Visitor's Center, one of few places the story is told. It is presented in pictures, statues, and large flip tablets appropriate for grade school classes and up. The center is on the beach side entrance to First Landing State Park operated by the Virginia Beach Convention Visitors' Bureau. 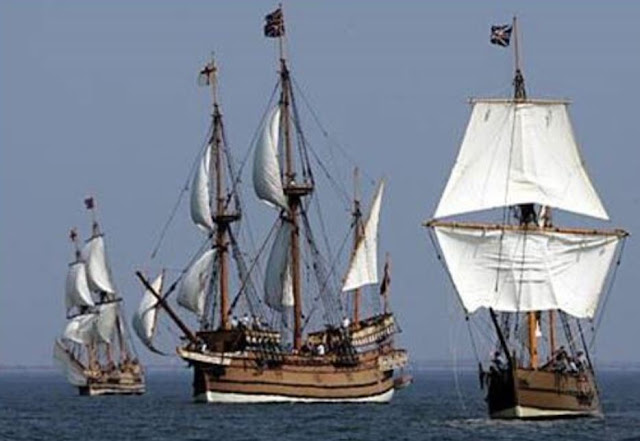 The history of the First Four Days in the New World begins in the early morning of April 26, 1607 with the landfall at Cape Henry of three ships, Captain Christopher Newport of the Susan Constant (largest of the three ships), Captain Gosnold of the Godspeed, and Captain John Ratcliffe of the Discovery (smallest of three ships). Their sponsor the Virginia Company of London provided a box containing instructions to be opened only when the expedition had made landfall. 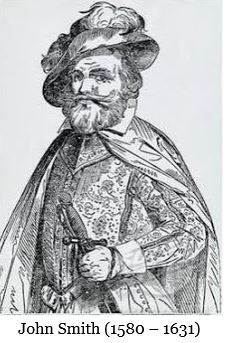 The orders designated Captain John Smith (1580 – 1631) to be one of the leaders of the new colony.  Since Captain Christopher Newport had charged Smith with mutiny during the voyage from England, this was indeed a surprising turn of events for all.  But this did make sense because 27-year old Smith had previously fought in foreign wars as opposed to the others who had never left London.  The Virginia Company orders instructed the expedition to find a sheltered area up river for protection against Spanish attack. The next day four carpenters built a 12-man boat (called a shallop) from wood they brought with them from England, and on April 28 Christopher Newport set out with a crew to find the best navigable channel for their journey up the James River, Newport named after King James I (1566 – 1625). 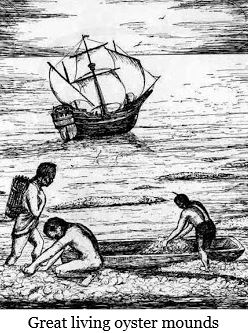 Rowing up the south side of the James, they found it to be too shallow for their ships which contained huge mounds of oyster reefs, some just below the surface which would wreck many ships in the following years. In those days oyster where huge consuming a whole dinner plate. One is on display at the Ferry Plantation House.
On their return that evening, they found the northern side of the James to have a channel deep enough for passage. They described it as "putting them in good comfort" (today's Old Point Comfort). 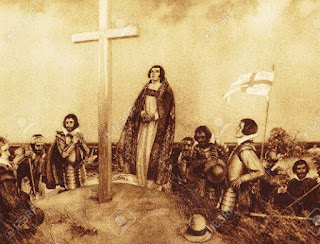 Beginning on April 26, 1920 yearly pilgrimages were made to this wooden cross with one of the celebrations in 1931 attended by more than 10,000 people including President Hoover. 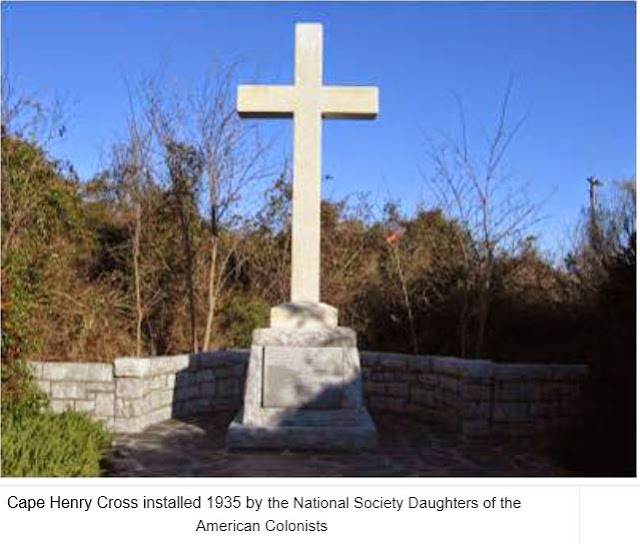 This wooden cross was replaced in 1935 with a granite cross, known as the "Cape Henry Cross" by the National Society Daughters of the American Colonists. In 2014 our church began participating in the ceremonies by holding a service at the First Landing Chapel after the blessing of the "Cape Henry Cross." 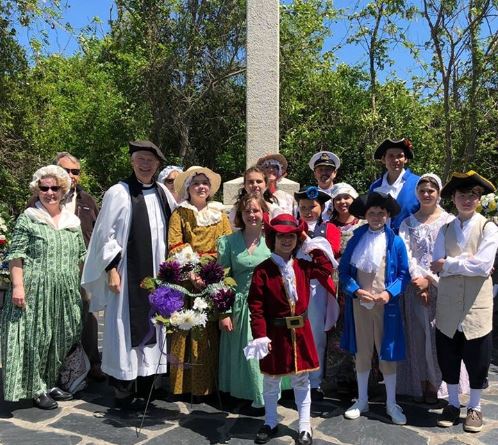 
There were two Revolutionary War (April 1775 – Sep1783) battles fought off the shores of Cape Henry.
On March 16, 1781 after the Battle of Cape Henry local Lynnhaven Parish residents saw British battle ships anchored at the mouth of the Lynnhaven River. They had arrived that evening after being mauled by a French fleet under the command of Admiral Destouches (de toosh). Destouches had soundly beaten the English fleet but instead Destouches sailed to Newport RI, a tragic tactical mistake. 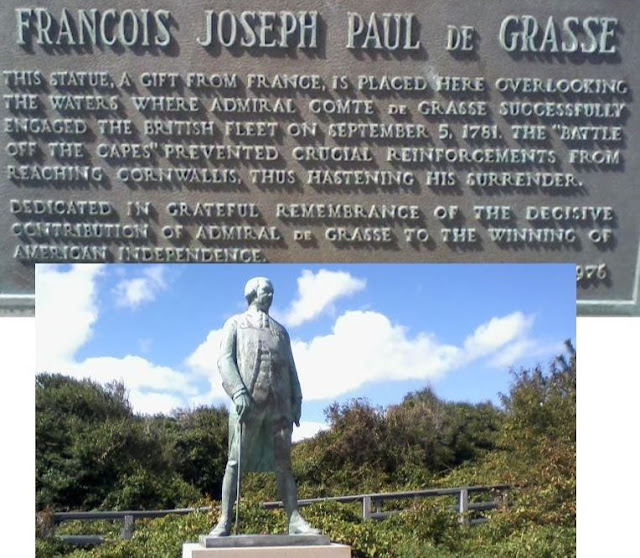 On Sep 1, 1781, Admiral deGrasse, commander of the French fleet, arrived at the mouth of the Lynnhaven River in a five day wait for the British. His Statue, a gift from France, was placed at the Cape Henry Historic Park in 1976. Many of his ships at anchor were missing officers, men, and boats when the British fleet was sighted on the morning of Sep 5. Their arrival caught de Grasse completely off guard. Local Lynnhaven Church members were at the time helping the French gather supplies. DeGrasse had to leave as many as 200 of his crew behind when he ordered his fleet to cut anchor at 11:30 a.m. to begin sailing out of the bay with the noon tide. The French took more than four hours to move single file through the then Bay's narrow channel. Admiral Graves commander of the English fleet waited 15 miles from the mouth of the bay, a tragic tactical mistake. 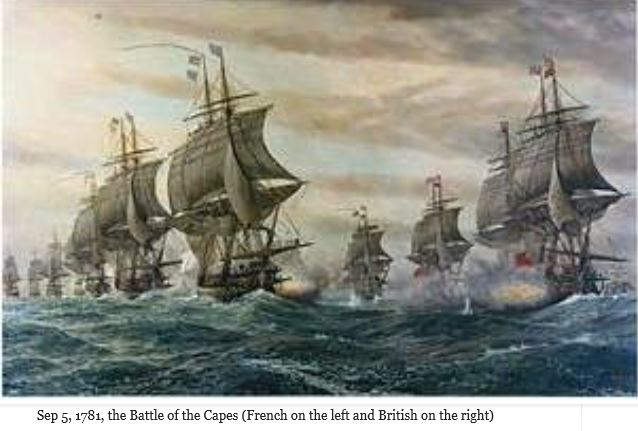 About 4:00 pm Sep 5, 1781 the French ships cleared the Bay and the historic Battle of the Capes was under way. The British were the first to open fire, but the French got the first advantage by aiming at British masts and rigging, crippling the two led British ships. The 2-1/2-hour epic battle, perhaps the most significant battle in American history, held the British fleet from reaching Lord Cornwallis at Yorktown with vital supplies, thus assuring General Washington of a victory over Cornwallis. This sea battle became critical in securing America's independence from England. 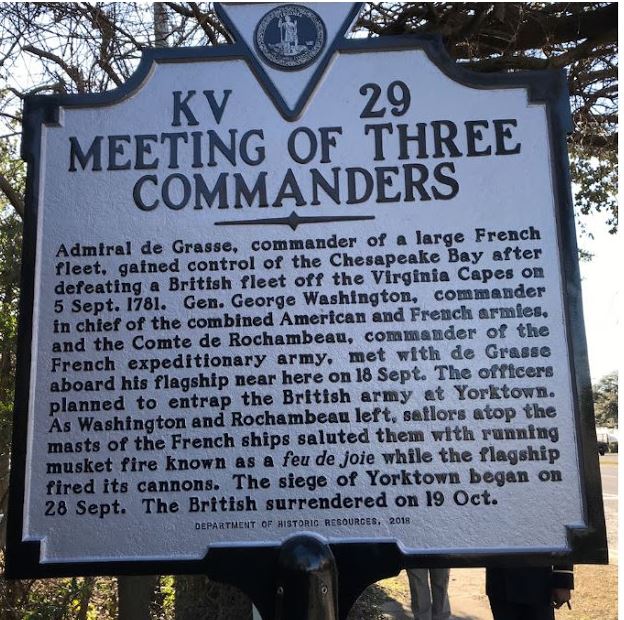 On Jun 1st 2019 the Old Donation Church's Historic Traditions Commission sponsored a bus tour to local historic sites in around Baylake Pines & Ocean Park beaches. Their last stop was at a roadside marker that was recently dedicated March 6, 2019, at Lynnhaven Colony Park on Shore Drive. It marked another forgotten event near Cape Henry towards the end of the Revolutionary War, the Meeting of Three Commanders Sep 18, 1781. Two weeks after the Battle of the Capes Admiral de Grasse, Gen. George Washington, and the Comte de Rochambeau met aboard de Grasse’s flagship at the mouth of the Lynnhaven River to plan the battle at Yorktown. Ironically this was the same locations British ships anchored after the Battle of Cape Henry in Mar 1781 and where Admiral deGrasse waited for the British in Sep 1781.
The siege of Yorktown began ten days later on Sep 28, 1781 with the British surrendered on Oct 19, 1781. 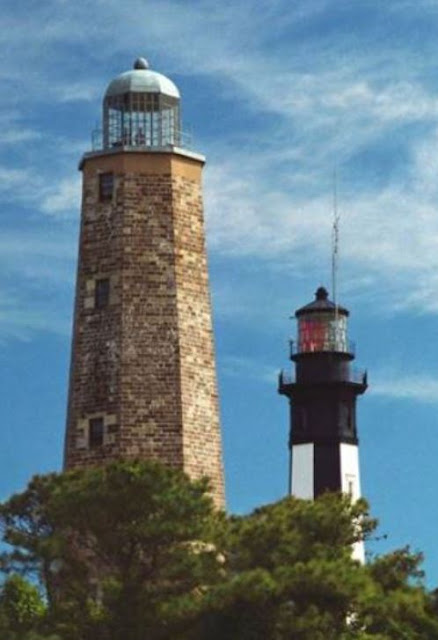 The first Congressionally funded lighthouse was built at Cape Henry in 1792. During the Civil War, to keep the lighthouse operational for Union ships, Maj. General Benjamin Butler sent black troops from Fort Monroe to guard it from Confederate attack.  The newer lighthouse was completed in 1881. 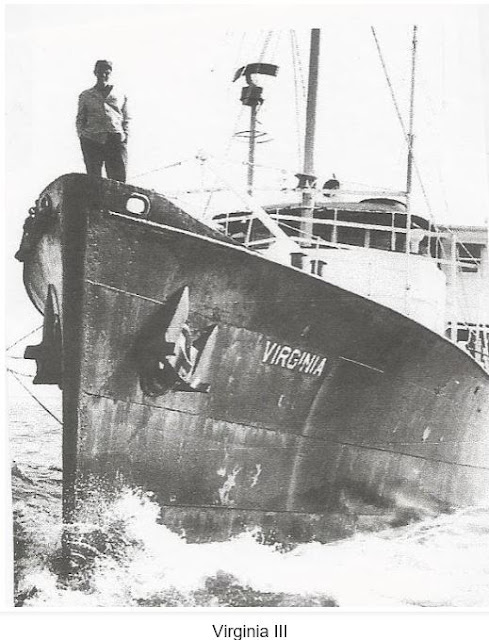 In 1866 the Virginia Pilot Association was formed and a 72-foot wooden schooner was anchored off Cape Henry to serve as the pilot’s base station for maritime traffic entering the Chesapeake Bay. Pilots waiting at Cape Henry would be transported in a yawl to the schooner to wait for ships entering the bay. They would then be taken to an incoming ship in another yawl. The pilot would climb aboard and standing next to the ship’s captain provide directions though the Chesapeake Bay to port. The last in a series of schooners, the Virginia III was commissioned in 1983. 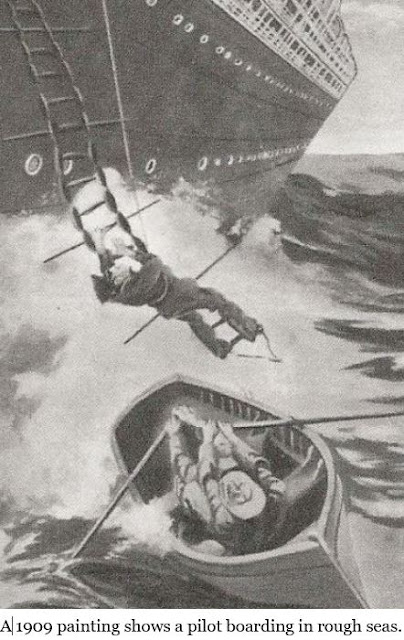 In stormy weather boarding a ship was not easy as depicted in this 1909 painting. 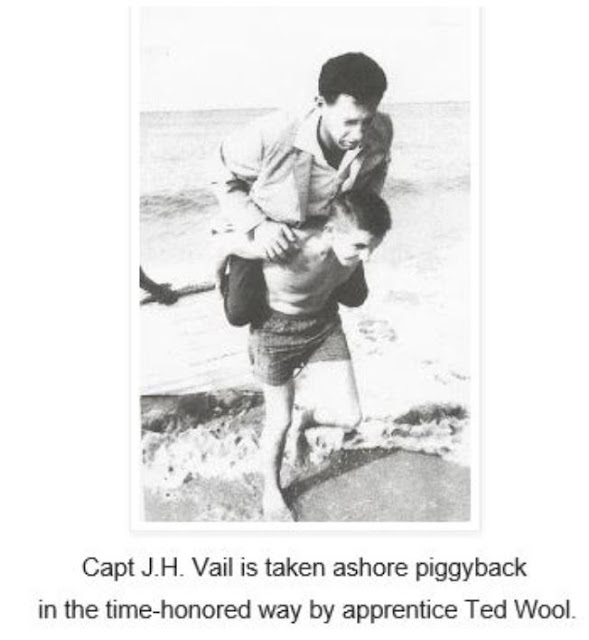 Pilots waiting to be picked up at Cape Henry where carried out twenty or so yards piggyback style by an apprentice pilot to the waiting yawl. In this picture the apprentice is Johnny Wool’s brother, Ted Wool.  Johnny was a long-time member of Old Donation Church's Men’s Breakfast. He died Nov 5, 2016. 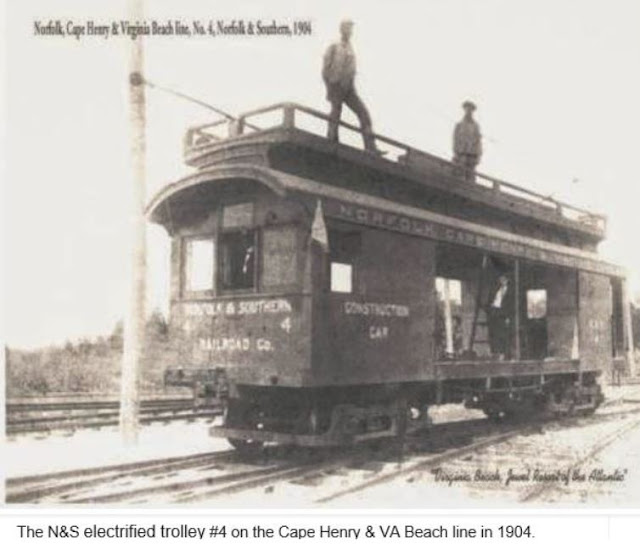 In 1902 the Chesapeake Transit Company opened an electrified trolley rail line across the Lynnhaven River on a rolling lift drawbridge to a railway station at Cape Henry. The station still stands today on the grounds of Fort Story Naval Base. In 1905 the Cape Henry train line was connected to the Norfolk and Southern line built north from the ocean front. This created a forty-two-mile electric train loop with train service operating every half hour. 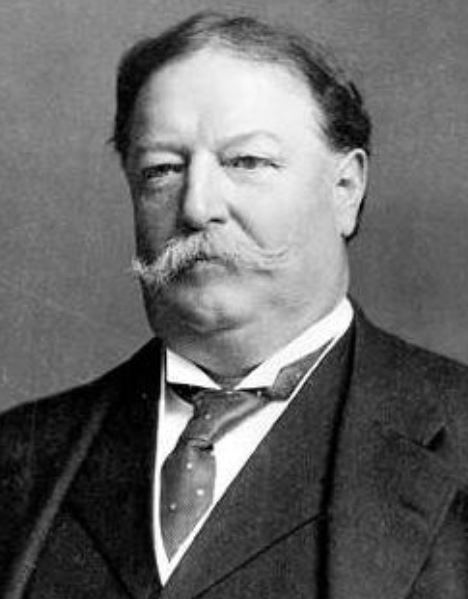 In 1905 William Howard Taft came to Cape Henry as Secretary of War to investigate fortifying the bay. When Taft became president four years later, he came to back to the area to push support for the construction of an island fortification midway between Cape Henry and Cape Charles. 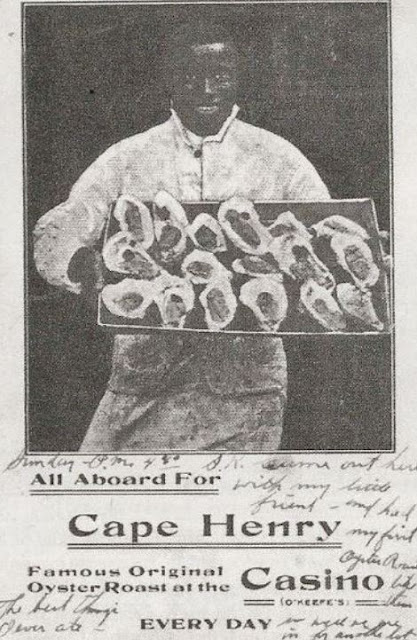 During his visit in 1909 Taft made the Lynnhaven Oysters famous after eating at O’Keefe’s Restaurant and Casino located at Cape Henry.  He later had them delivered to the White House, and by singing their praises Taft gave Lynnhaven Oysters national attention and paved the way for wholesalers to ship them all over the east coast. 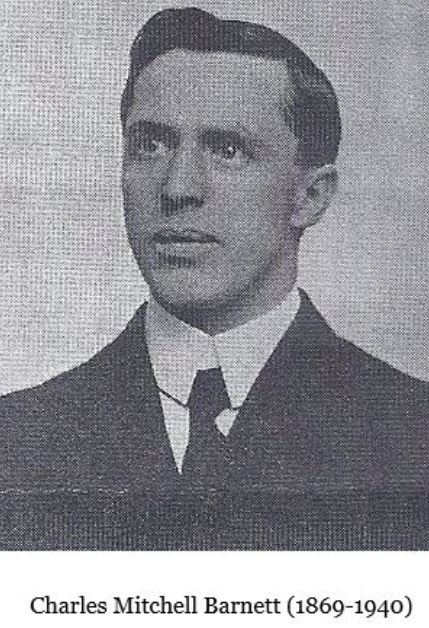 By 1912 Slade, C. M. Barnett was shipping them to New York’s Waldorf Astoria Hotel and Grand Central Station. He was responsible for securing $7,000 from a New York bank for the reconstruction of the church in 1916. 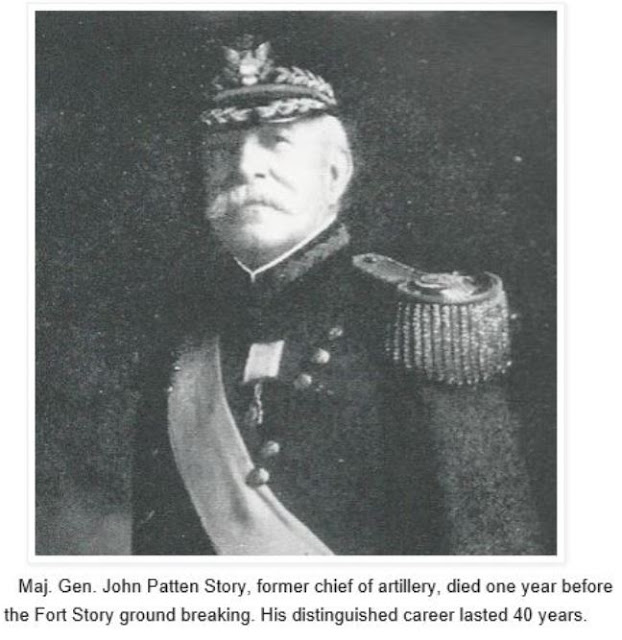 The island plan eventually proved too costly, and in 1913 the federal government instead purchased land at Cape Henry naming it for Gen. John Patton Story, a noted coast artilleryman of his day. 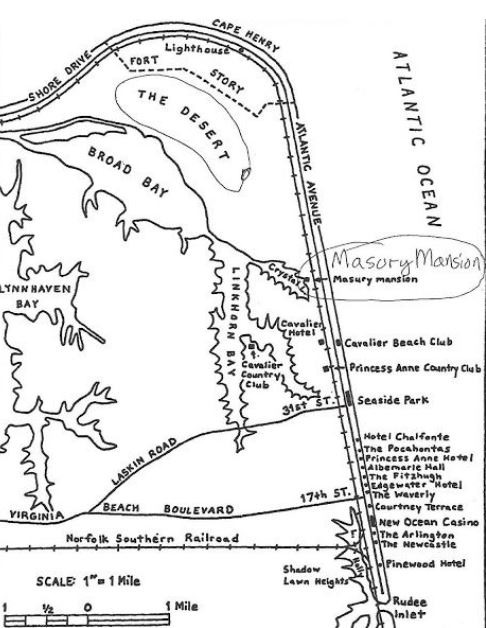 Positioned at the mouth of the Chesapeake Bay, the wilds of the Cape Henry "Desert" had long been regarded as a "paradise for moonshiners." During prohibition from 1920 to 1933 Cape Henry played a considerable role in eluding authorities and getting moonshine to the Middle Atlantic region.

In 1941 the Headquarters of the Harbor Defense Command was moved from Fort Monroe to Fort Story requiring more land which extended Fort Story to the ocean consuming the land where the two lighthouses and O’Keefe’s Restaurant were located. In 1944, Fort Story began to transition from a heavily fortified coast artillery garrison to a convalescent hospital for returning veterans. By the time of its closing March 15, 1946, the hospital had accommodated more than 13,472 patients.   (map of Cape Henry)