In Each of Our Three Churches
“You Are There”

Going back in time with the CBS Radio/TV series “You Are There,” http://en.wikipedia.org/wiki/You_Are_There_(series) here are those special times in each one of our Lynnhaven Parish / Old Donation Churches.

Announcer.  During a friendly visit in 1653 by Currituck Indians, the Chief saw Sarah Thoroughgood-Gookin-Yeardley’s children reading together and requested that his only son be raised by the Yeardley’s as a Christian “to speak out of a book and to make a writing.” Mr. Yeardley agreed and also committed to building an English house for the chief.  The Chief returned with his son and 45 Indians for the ceremony Sunday, May 17th 1654.  The activity takes place inside 15 year old Lynnhaven Parish Church No. 1 at Church Point. 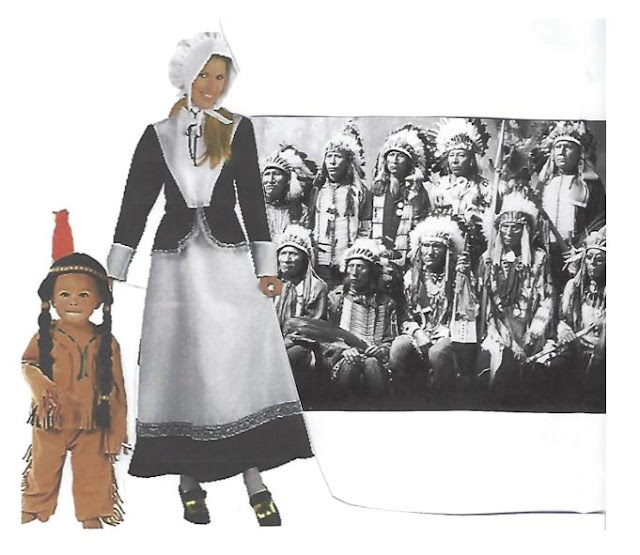 First Lady. Here they come now. She’s got that Indian chief by the hand. How absolutely disgusting!  And she’s got all that jewelry draped on her arms and hanging around her neck that she traded with Moseley for some cows.  Poor guy came from Holland with only a shirt on his back and a bunch of jewels.  He’s sure as sin destined for the poorhouse, pitiable chap.

Goody Layton.  Yes, but no one dare cross Mistress Sarah.  Fourteen years ago she had me crawl down this here aisle on a Sunday service and ask forgiveness on my knees for wronging her dead husband when I said the word "Pish!"

First Lady.  I heard this is a baptism of that little heathen boy, but I think once the Indians get in here they’ll turn on us, scalping us all. Remember 15 years ago when Capt Adam Thoroughgood, bless his soul, went after a band of Indians for massacring plantation folks?  Capt. Adam would roll over in his grave out there in our graveyard if he could see his high and mighty widowed wife, married three times, leading these savages down the aisle. What’s this world coming to?


Announcer.  The Indians left the little Indian boy behind to be raised by Sarah, and Sarah’s husband, Colonel Francis Yeardley, dispatched men to Currituck to build for the Chief an English style house. Sarah died three years later, and the fate of the Indian boy is unknown.  As for Col. Edward Hack Moseley, he and his heirs became one of the most influential and wealthiest families at Lynnhaven Parish, all from Sarah’s cows. 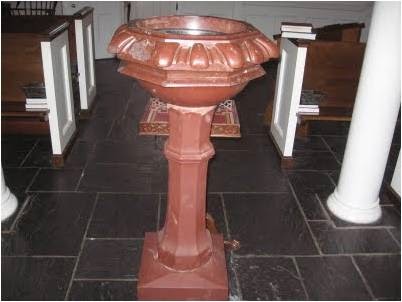 The baptismal font at Church No.1 used for the baptism of the Chief’s son was recovered from the
Lynnhaven River in the early 20th century. It had been used for many years as an anchor,
and now resides at the entrance to Church No. 3 (present church). 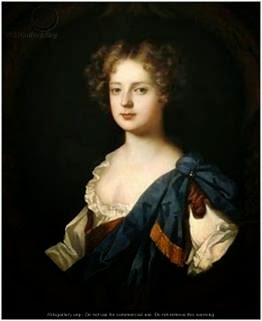 What did Sarah Thoroughgood-Gookin-Yeardley look like?
From descriptions, here is a portrait of a likeness showing a 1650 Virginia woman.

Church No. 2 (1693 to 1736-which reverted to a school for orphan boys through the early nineteenth century)

Announcer. On Saturday, July 10, 1706 at the trial of Grace Sherwood accused of being a witch, Senior Warden Maximilian Boush stands in front of the Lynnhaven Parish Jury, all vestry members.

Maximilian Boush. Elizabeth Hill, being already sworn in, tell us in your own words why you have accused Widow Grace of being a witch.

Elizabeth Hill. Well first she cast a spell on Richard Capps’s bull, causing it to die. Then she bewitched John Gisburne’s hogs and cotton crop.  She blighted my gardens and caused our livestock to die. She even made the weather ruin our crops.  We know for certain she practices witchcraft, and she needs to be dealt with just as those witches were dealt with up there in Salem several years back.

Maximilian Boush.  Widow Grace, come forward and defend yourself standing on this stool.  I am in great hopes you will save your soul by confessing to the Almighty asking forgiveness for your wicked deeds.

Grace Sherwood.  I be not a witch, I be a healer.

Maximilian Boush. Is there anyone in this congregation who might speak in the defense of the widow Grace Sherwood (long pause with silence)?  Come now – I know she’s cured many of you and delivered your babies.   There must be one of you in this packed church and standing outside at the windows who might speak kindly of her.

Maximilian Boush.  Well, Widow Grace, seems this church can find no one who will speak in your defense. Therefore, we must let the waters of the Lynnhaven test you making a final decision as to your guilt or innocence.  Sexton, I order you to take your men and clear the road of mobs come to witness this event.  Jury, I order you to bind Widow Grace and march her down to the river.  Church women, I order you to undress her at riverside to inspect her once more to be sure she has the marks of the Devil.  If this be indeed the case, Sheriff, I order you to bind her, row her out into the river and cast her into the water.  If Widow Grace floats up that will be proof that consecrated waters have rejected her and she be indeed a witch.  Sheriff, you are further instructed to take care of her life to preserve her from drowning. If she floats march her back to our jail house.
Announcer.  Grace was able to untie her binds and swim ashore.  She was taken to the jail where Church No. 3 now stands.  On that day the vestry voted for the construction of a proper ducking chair, the kind used in Salem, Massachusetts in 1692, but the Vestry never did follow through in building a proper ducking chair nor did they discover any more witches. Up in Salem, less than four years after the trails started, Rev. Samuel Willard read aloud his apology to his congregation "to take the Blame & Shame;" but down here, Grace languished in jail for more than seven years.  Only 308 years later did Old Donation apologize.  Rev. Drew Foisie, at the blessing of a stone honoring Grace, said, “Accept, we pray, this stone and its placement in this garden; and grant that as we look upon it we will remember Grace and lay aside our prejudice and fear, and incline our hearts to walk in love and act with justice.” 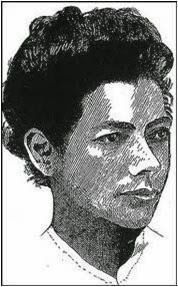 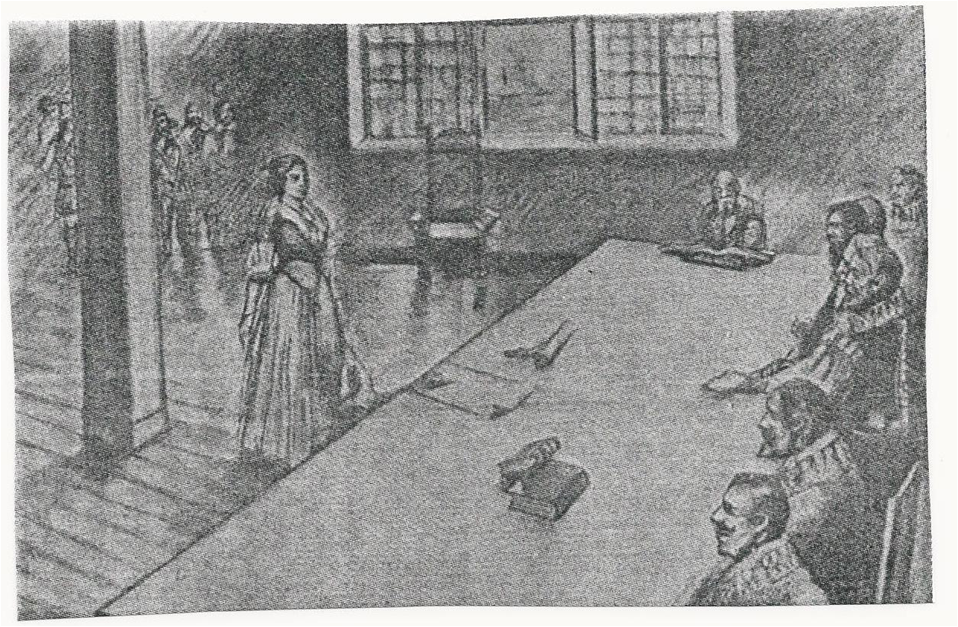 Grace Sherwood, accused of being a witch,
stands in front of the Lynnhaven Parish Jury
Saturday, July 10, 1706 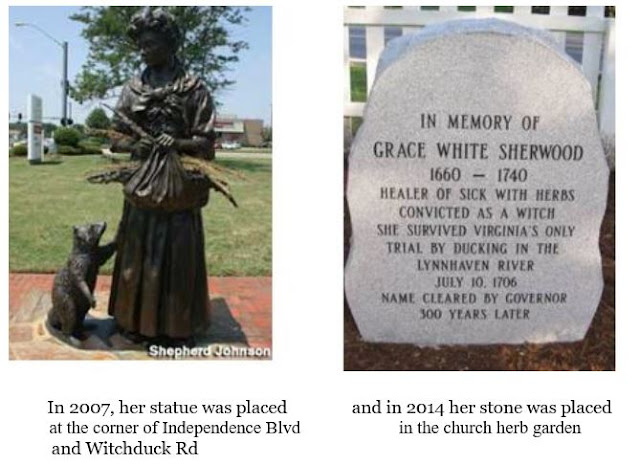 Mr. Alfriend.  Thurmer, I’m much obliged for your hard work in planning our 19th annual event here, even bringing a small organ for the first time.  This is the best crowd we’ve had to date.  You’ve certainly succeeded in keeping the county from laying claim to Old Donation, a church you worshiped in as a youth.

Thurmer Hoggard IV.  Yes Richard, as a young boy we had a small but vibrant congregation. Then bankruptcy, cards, the bottle, the horse-race, and continual feasts were the destroyers.  As a nine year-old when we heard about the complete destruction of Walke Manor House when one of David Walke’s late night drunken poker friends accidentally tipped over a candle setting fire, that incident  seemed to put the lid on what was tearing Lynnhaven Parish apart.  But let us hope for better times and strive for them. What are your future hopes?

Mr. Alfriend.  Thurmer, I’m hoping we can get a local congregation together  and get this church rebuilt.  Someday I might even be ordained and be buried under these sacred grounds. What’s in your crystal ball Thurmer?

Thurmer Hoggard IV.  Richard, I think I’m at the end of my road.  My son and two daughters have been a great help to us and I hope, with their support, you’ll carry on here, but if you become ordained, I’m sure your first call will be back at Emmanuel. With money so tight and with only a few folks interested in restoration, I see a long road ahead.

Mr. Alfriend.  Thurmer, those few folks are all we need. I’ve got my sights on Slade Barnett who lives down the road at Ferry Farm. He and his wife Stella moved here not more than three years ago. They say he plans to make a fortune selling those famous Lynnhaven Oysters up north. And then there’s Flora, General Jeb Stuart’s widow. Along with Judge White they hold a lot of sway in Princess Anne County.

Thurmer Hoggard IV.  Richard, you always did see the bright side of things. My Goodness, I just said that as the sun started shining on the wall behind Miss Frances, and just as she goes striking up Onward Christian Soldiers.  Look, over there the choir’s in their vestments waiting for us to lead them in our traditional procession with uplifted cross, marching around these consecrated walls. “Onward Christian soldiers, marching as to war, with the cross of Jesus going on before.” Yes Richard, we’re like a phoenix going on before and out of the ashes to a rebirth of Old Donation.

Announcer.   Thurmer Hoggard died a year after that 1901 service. His son, two daughters and Mr. Alfriend continued to hold services in the walls of the burned out church for another twelve years.  In 1913 a saw mill was erected and huge trees that had grown up within the walls of the church were cut up and the lumber used to build a parish house and horse sheds where Tucker Hall now stands.  Finally, after Charles (Slade) Barnett and Judge White were able to borrow $7,000 from a New York banker for the reconstruction, the church opened for services at a Christening ceremony October 11, 1916. 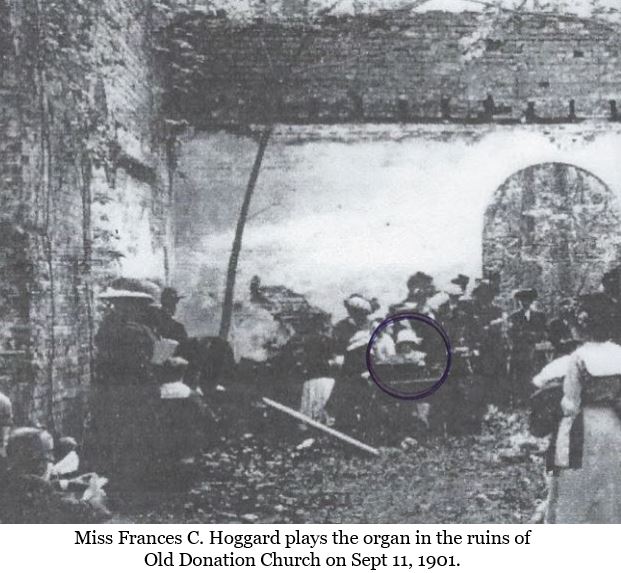 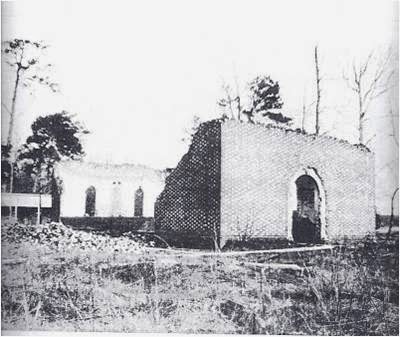 Sometime before the church was rebuilt, this is a view of the north front corner.
Stables used by past parishioners remained and can be seen in the rear of the church. 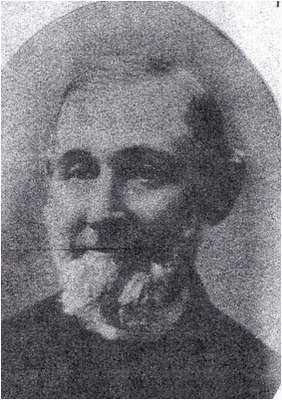 and Reverend Richard J. Alfriend (1860-1923) below
have a conversation prior to the yearly service
in the ruins of Old Donation September 11, 1901. 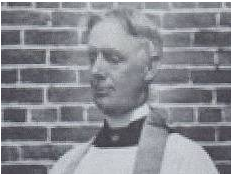