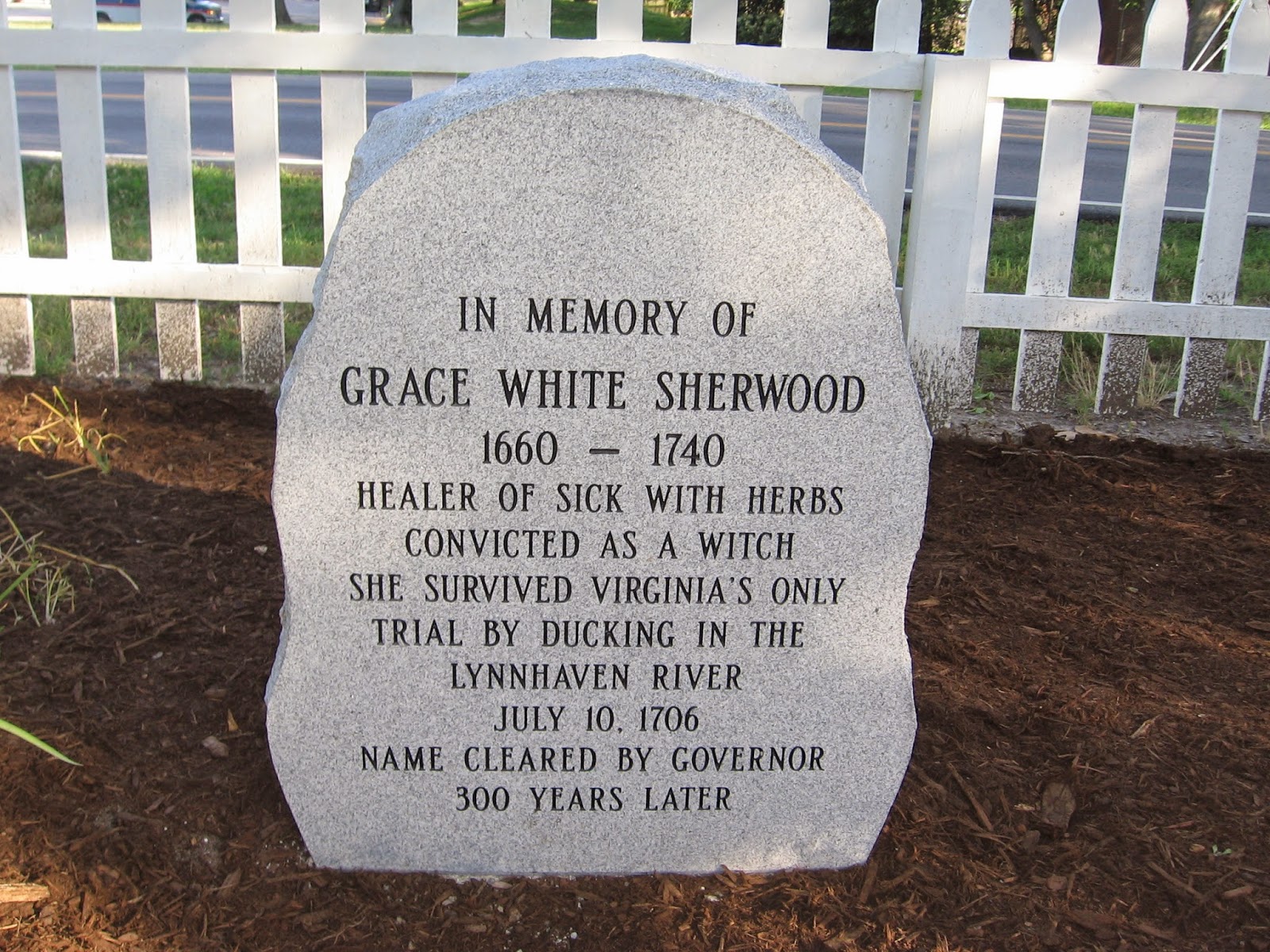 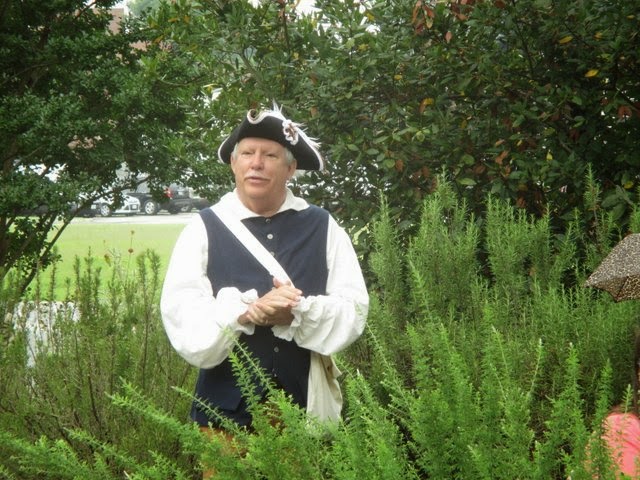 In 2013 the Historic Traditions Committee, under the leadership of Pete Owens (see above picture), voted to place the Grace Sherwood stone in the Herb Garden. Through generous donations, the stone was made and delivered on June 26th, 2014 by the Norfolk Monument Company.  A dedication ceremony was held July 10th at 10 a.m. the time 308 years ago Grace Sherwood was marched down Witchduck Road to be ducked in the Lynnhaven River. The Virginian Pilot was on hand to publicize the event - see “Witch of Pungo's Church Dedicates Marker to Her,” by Mary Beth Cleavelin, the Virginian-Pilot, © July 11, 2014
http://hamptonroads.com/2014/07/witch-pungos-church-dedicates-marker-her 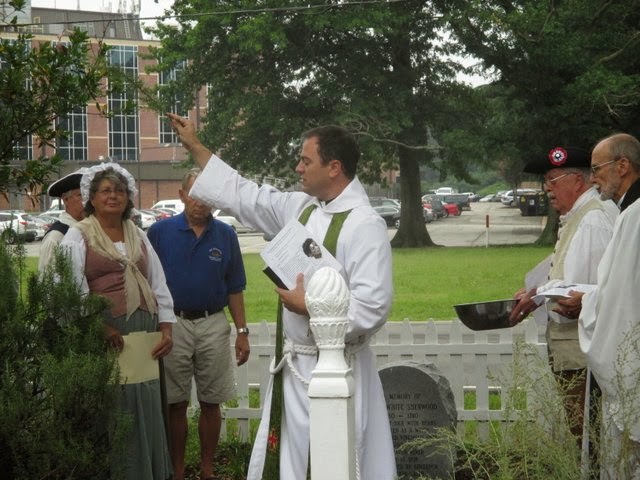 Christ is the icon of the invisible God; all things were created through him and for him. The Word became flesh: (people) “and dwelt among us.” Almighty God, whose Son our Savior manifested your glory in his flesh, and sanctified the outward and visible to be a means to perceive things unseen and to remember things forgotten: Accept, we pray, this stone and its placement in this garden; and grant that as we look upon it we will remember Grace and lay aside our prejudice and fear, and incline our hearts to walk in love and act with justice; through Jesus Christ our Lord, who with you and the Holy Spirit, lives and reigns, one God, forever and ever. Amen.

O God the Father of our Lord Jesus Christ, our only Savior, the Prince of Peace: Give us grace seriously to lay to heart the great dangers we are in by our unhappy divisions; take away all hatred and prejudice, and whatever else may hinder us from godly union and concord; that, as there is but one Body and one Spirit, one hope of our calling, one Lord, on Faith, one Baptism, one God and Father of us all, so we may be all of one heart and of one soul, united in one holy bond of truth and peace, of faith and charity, and may with one mind and one mouth glorify thee; through Jesus Christ our Lord. Amen. 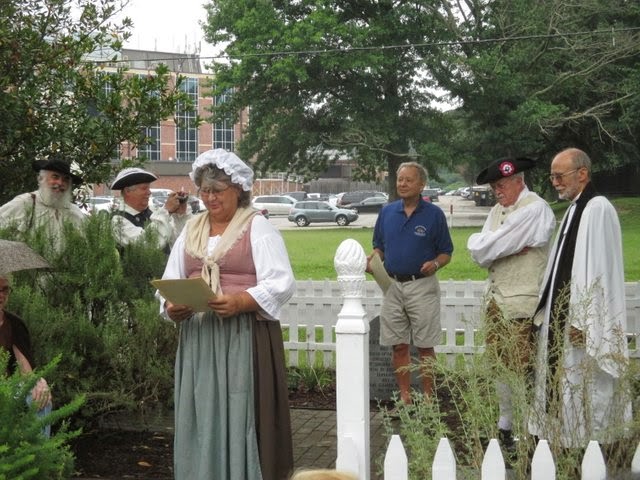 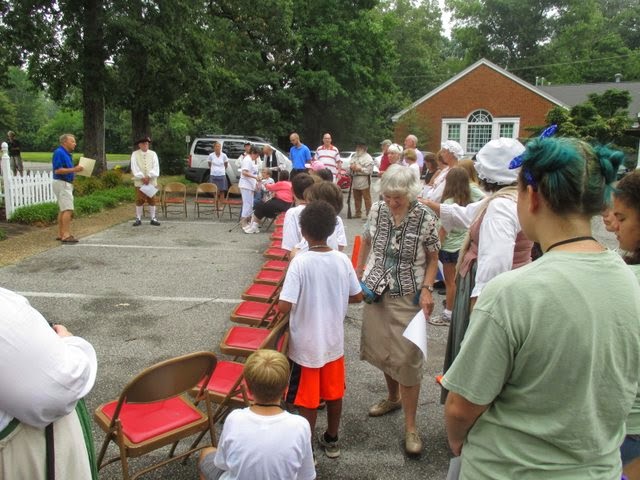 Today we come together to honor a woman who was dishonored.  Grace Sherwood was a member of Lynnhaven Parish since her birth in 1660 and for sometime after her 1706 ducking.  She married in our first church at Church Point, had three children, and attended our Eastern Shore Chapel-of-ease Church.  Besides farming and swimming in the ocean every day she helped the members of the parish when called upon, delivering babies and caring for the sick with her extensive knowledge of herbs.

Grace, however, was ahead of her time.  When she became a widow, she refused to stand before the congregation as “the weaker sex” and select a husband.  She carried on with her life—planting and harvesting, and raising her children.

A jealous Elizabeth, wife of Luke Hill, using the most damning accusation of the time, witchcraft, turned a whole Lynnhaven Parish congregation against Grace.  When Grace was marched into Lynnhaven Parish Church No. 2, known as the Brick Church or Mother Church, on the morning of July 10th, 1706, 308 years ago on this day, she was commanded by Senior Warden Maximilian Boush to ask forgiveness for being a witch.  She steadfastly declared, “I be not a witch.  I be a healer.”  There must have been an air of group conformity over rational thinking as not one person spoke up for her in that packed little church, some the very people she healed and those whose babies she brought into the world.

Historically, Grace is the only woman to be declared a witch in Virginia.  Her reward for her tireless caring work was a ducking in the Lynnhaven River and over seven years incarceration in a tiny jail, a jail torn down 30 years later to make way for our 3rd Lynnhaven Parish Church (today’s church).

Ten years prior to Grace’s ordeal and three years after the end of the Salem Witch Trials, Rev. Samuel Willard of Boston's South Church proclaimed, "blame & shame" for hanging 19 and incarcerating over 150 accused of being witches. In addition, twelve trial jurors stepped forward asking forgiveness.  But even though the Lynnhaven Parish Witch Trail claimed only one, Grace’s label as a witch was not lifted for 300 years until Virginia Governor Timothy Kaine in 2006 officially exonerated her conviction.
(Turning to face the stone) Grace, we dedicate this stone today to your honor.  Old Donation Church is a little late with this, but it can never be too late for us to heal our wounds, and what a more appropriate place than this herb garden, a place your spirit will finally rest in peace knowing a church that dishonored you has  finally honored you.
I close with these words, “Forgive us our trespasses.”  With this simple request from the Lord’s Prayer may we find forgiveness of our sins and for those who came before us.

Thank you for coming to this blessing of the Grace Sherwood Stone.

Note: There were around 50 who came to the ceremony. You are cordially invited to stop by and see the stone in the Herb Garden which is out in front of the Parish Hall, 4449 N. Witchduck Road, Virginia Beach, VA 23455.